Enrol
Open
View
Scroll
Close
Home
View
more
Back to Thought Leadership
What is it to be gifted?

Where would we be without Microsoft? Thanks Bill Gates. Thank you, Marie Curie, for championing the development of X-rays and your role in science. Thanks, Stephen Hawking, for ‘The Theory of Everything.’ Are these extraordinary people gifted or talented?

Canadian psychologist, Francoys Gagne developed the following definitions in the 1980s to differentiate between someone who is gifted from someone who is talented.  According to Gagne, to be gifted is ‘the possession and use of untrained and spontaneously expressed natural abilities (aptitudes or gifts) in at least one domain.’ (see figure 1). To be talented is ‘to demonstrate superior mastery of systematically developed abilities (or skills) and knowledge in at least one field of human activity that places that individual within the upper ten per cent of same age peers who are or have been active in that field.’ (see figure 1). 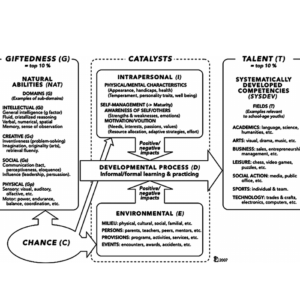 Gagne’s differentiated model of giftedness and talent (DMGT.2007) Please use the source link below for a high resolution example.

The truth is most of us are not gifted.  To be diagnosed as gifted you need to have an IQ score of 130 or higher on an Intelligence Quota (IQ) test.  These tests can only be administered by a registered psychologist. It is estimated that between two and five per cent of the population have an IQ of 130 or above.  An IQ score between 115-129 is to be mildly gifted.  So, what about the rest of us? Never fear, you still have your talents and skills and an ability to think and learn!

Giftedness is not always easy to identify. According to the Victorian Association for Gifted and Talented Children, a common trait of a gifted individual is an ‘extreme thirst for knowledge’ and an ability to locate information from various sources (see information.

There is a lesser-known group of gifted people known as ‘twice exceptional’. These people often have a well above average ability to problem solve, and a curiosity in one or more areas as mentioned in Gagne’s model above.  However, twice exceptional people are difficult to identify as they have additional conditions which can mask their true potential such as a language disorder, specific learning disability or ADHD to mention a few. That is not to say that people with these conditions are all gifted. It is believed that they represent only an approximate six per cent of the world population – that’s a small number!

A university lecturer in Giftedness once told me that he had visited the home of a Year 10 student who had dropped out of school. Evidently, the student spent an extra-ordinary amount of time pondering the question ‘Does a tomato feel pain when it is sliced?’  A question that most of us would dismiss as frivolous. The student was assessed with an IQ above 130! The point the university lecturer was making was that ‘Gifted children need to be nurtured in school and at home if they are to realise their potential.’ At Westbourne, we focus on nurturing the whole child.